All Collections
Users
How to use Advanced User Groups

How to use Advanced User Groups

This article provides an overview of our advanced user groups, roles and permissions and detailed instruction on how to use this feature.

Written by Drew Harding
Updated over a week ago

Why Use Advanced User Groups?

This feature allows you to completely segment an account. In doing so, you can improve user workflows and management of the digital signage network.

In our example below, we have a fictional company called ‘ABC Inc’. ABC Inc have offices in London and New York. They have one embed signage account but want the London and New York offices to have control over their own digital signage without either location having access to the other.

The first thing to understand is the process of what we are about to set up, which is:

ABC Inc know that they have four key types of users they want to create:

Now we know the types of user roles needed for the account, we can set them up via:

Admin Role:
This is setup on every embed signage account by default.

IT Technician Role:
Setting up the IT Technician role, we allow access to: View, Register, Edit and Delete devices.

Creative Role:
Next up, we set up the Creative role that has access to: view, add and edit layouts and playlists as well as viewing, uploading and editing media items.

Communications Role:
Finally, we create the Communications role that has access to: view, add, edit, delete and publish channels (having the final say of what goes live.) 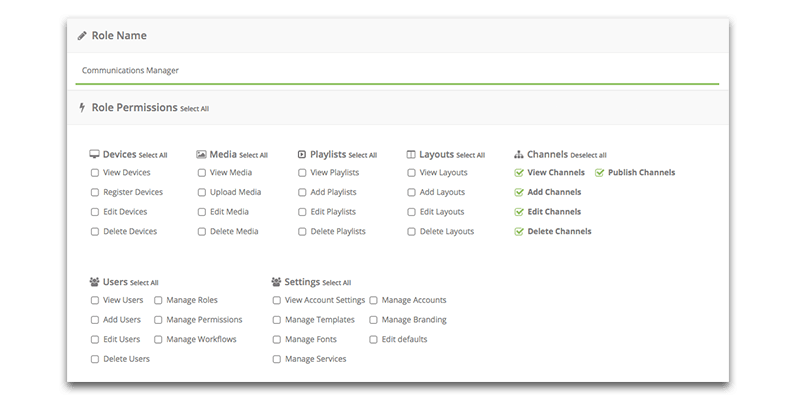 Now that the various user roles have been set up, we need to add the relevant people from each office to the account. This is done via:

Ensure the ‘user role’ for each user is assigned correctly so that each new user is given the specific permissions assigned to their roles.

Got all the users set up? Good. Now let’s start adding them to the relevant groups.

We’ve got our user roles defined and our users set up, now we need to segment the users into the relevant groups.

First, let’s set up a group for the London office, which can be done via:

Here we can define the Group Name, which we will call ‘London’. We then select which users we want to add to this group… which we will add: 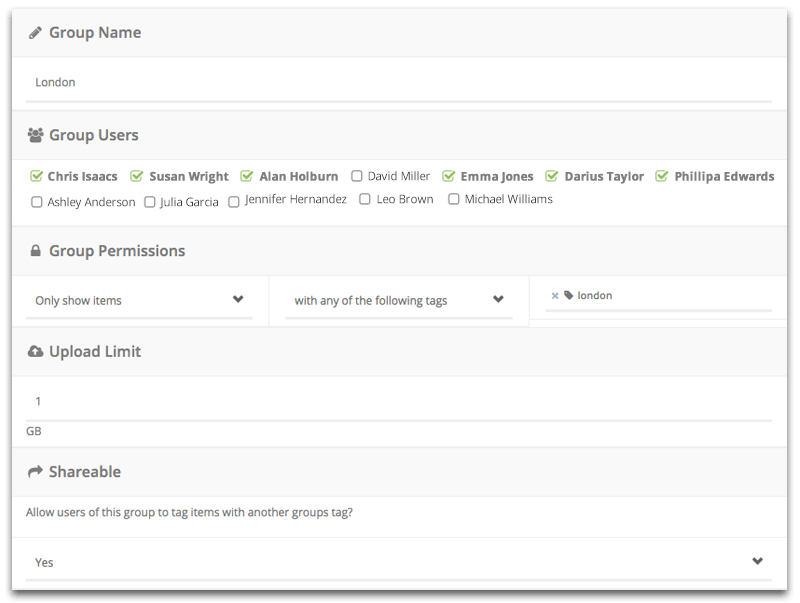 Next, we specify the Group Permissions – a very important part of the setup. This is where we set the permissions of the group and relevant tags. The options available are:

Now we’ve set up the user roles, added users and segmented them into groups we need to add items to those groups. We do this using tags.

Tags can be added to almost any item within embed signage. Users can tag folders and all items within folders, individual devices, media, layouts, channels, global playlists, plugins, account settings and various other elements within an account.

The London group has been set up to Only show items with any of the following tags: london. So, anything we now tag with ‘london’ will be visible to users in the London group with the relevant permissions (and of course, main account Admins that are unassigned to a group). For example:

And that’s it… Now simply repeat the process to configure all the necessary User Groups to segment the account.

Did this answer your question?